DOC is monitoring the population of Antipodean and Gibson's wandering albatross in offshore islands and researching what effects their population.

Antipodean wandering albatross is a long-lived species which follows a "live slow, die old" strategy. The longevity of the species with a delayed start to reproduction makes detecting population changes and identifying the driving factor behind the changes difficult for this species. 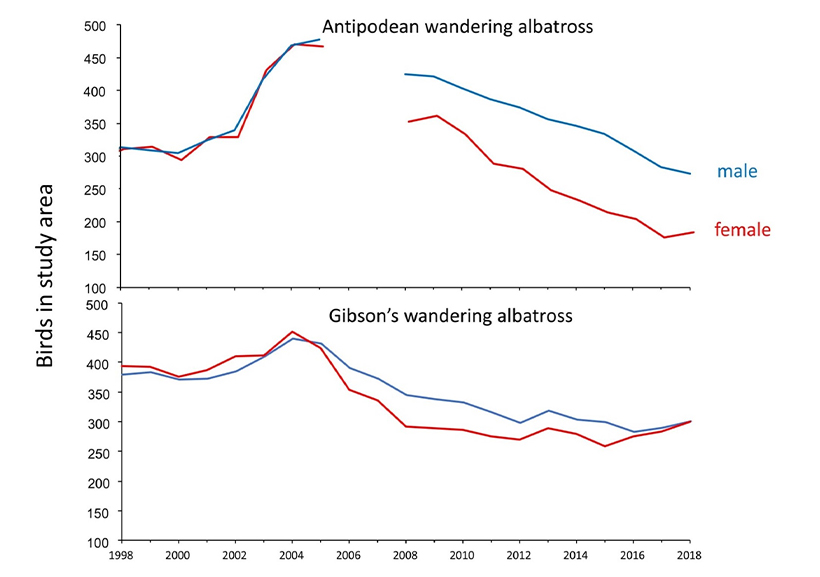 The most concerning decline is for the Antipodean wandering albatross, where it has been projected that with the current rate of decline, there will be less than 500 breeding pairs in the next 20 years.

To ensure the correct actions are taken to recover the population we need to properly understand the factors responsible for the decline. So far, the major threats driving the decline of the Antipodean wandering albatross are:

Antipodean wandering albatross feed by scavenging squid and fish from the surface of the waves or plunging into the water in shallow dives. They are frequently attracted to the fishing boats due to the easy meal they provide. This results in albatrosses being accidentally caught on the fishing gear especially in longline fisheries in absence of proper bycatch mitigation measures.

The warming seas mean a decrease in the albatross’ food supply in their historical foraging area. To acquire food, the birds thus need to travel larger distances beyond their known foraging range that put them in the paths of dangerous fishing vessels resulting in increased bycatch mortality. But analysis of population data suggests that the impact is not even, and the bycatch mortality is female-biased for the Antipodean wandering albatross.

This is consistent with the analysis of tracking data which suggests that the females of Antipodean wandering albatross are the ones that have changed their foraging range the most. They are venturing much further north (up to and north of 25⁰S) and further east to the coast of South America. This means they now overlap with a far greater number of fishing fleets in the high seas exposing them to a greater risk of being bycaught.

To better understand the driving factors behind the population decline of this nationally critical bird and halt the decline, DOC has developed a five-year suite of actions. The primary focus areas are:

Monitoring the breeding population at Antipodes Island will be ongoing to detect changes in productivity, nest success, recruitment, and adult and chick survival. The influence of the uneven sex ratio due to sex-biased mortality on the population also needs to be investigated.

Research on Gibson’s wandering albatross at Adams Island is also planned to continue.

Assessing and updating the correct distribution and foraging range is important from a management perspective. Identification of foraging areas and evaluating bird vessel interaction in high seas will allow us to push for mitigation measures in the areas where the birds are frequently foraging and facing the highest risk of getting killed.

Ongoing evaluation of fishing best-practices to reduce the impact on Antipodean wandering albatross and other seabirds is critical in the reduction of bycatch.

Options for increased observer coverage, electronic monitoring, and use of vessel movement pattern validation during fisheries operations are being probed to get a more accurate representation of efficiency and use of mitigation measures by fishing vessels.

4. Evaluating the effect of climate change

Research will focus on the effects of increased sea temperatures and altered ocean currents and wind patterns on Antipodean wandering albatross and their food availability to determine the effect of climate change on the populations.

Increased energy expenditure and difficulty in finding food during foraging trips especially during the breeding season are likely to have negative effects on survival of different age classes.

Preliminary analysis of tracking data revealed that the birds are spending a higher proportion of time foraging outside the New Zealand Exclusive Economic Zone (EEZ).  The distribution range of Antipodean wandering albatross overlaps with five RFMOs and the birds forage within the EEZ of Australia and Chile.

Efforts are underway to establish a multilateral agreement with the range states and RFMOs to provide enhanced protection to Antipodean wandering albatross that will prevent accidental bycatch in their waters.

New Zealand is also actively participating in Agreement on the Conservation of Albatrosses and Petrels (ACAP) and Convention on Migratory Species of Wild Animals (CMS) to enhance cooperative actions to address the threats faced by Antipodean wandering albatross in international water.

Engaging with a wide range of stakeholders and the general public is important to raise general awareness about the species and the current threats. Web-based interfaces are being developed to allow the data available for the birds to be opensource and interactive.

The tools are intended to be used for raising awareness, conservation management planning, risk assessments, and independent research. Resources currently available include:

Past research and reports

At-sea distribution of Gibson’s and Antipodean wandering albatrosses, and relationships with longline fisheries