Why wetlands are important

Wetlands have many surprising benefits including improving water quality and reducing floods.

Wetlands improve water quality. As water moves into a wetland, the flow rate decreases, allowing particles to settle out. The many plant surfaces act as filters, absorbing solids and adding oxygen to the water. Growing plants remove nutrients and play a cleansing role that protects the downstream environments.

Wetlands can also reduce the impacts of flooding, as they can absorb heavy rain and release water gradually. Downstream water flows and ground water levels are also maintained during periods of low rainfall. Wetlands help stabilise shorelines and riverbanks.

Many wetland plants have specific environmental needs and are extremely vulnerable to change. Some of our endangered plant species depend totally on wetlands.

Native fish need wetlands too. Eight of New Zealand's 27 species including inanga, short-finned eels, kōkopu and bullies are found in wetlands, while the whitebait fishery depends on the spawning habitat offered by freshwater wetlands. The decline in native fish populations is directly related to massive reductions in freshwater habitat. 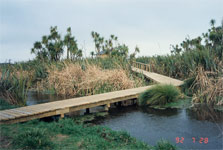 Wetlands were a treasure trove for early Māori, providing flax for clothing, mats, kits and ropes, raupō for thatching and dried moss for bedding.

The eels, fish and birds which lived there were a good food source and the feathers of birds like pūkeko and bittern were used to adorn cloaks and other garments. Waterways were an important means of access by waka (canoe).

The international significance of wetlands is reflected in the Convention on Wetlands (the Ramsar Convention).

The Ramsar Convention launched an international report in 2013, The Economics of Ecosystem and Biodiversity for Water and Wetlands.

The report states the need for a major shift in our attitudes towards wetlands. We need to recognise their value in delivering water, raw materials and food. They are essential both for life and the sustainability of the world's economies.

Wetlands support a wide diversity of species, in large numbers. Their popularity is proven by ample visitor numbers at places like Sinclair Wetland near Dunedin, and the Miranda Shorebird Centre at the Firth of Thames. Arawai Kakariki sites (Awarua, O Tu Wharekai and Whangamarino) also attract lots of visitors.

There are also many interesting education opportunities, and we have produced a number of education kits and resources on wetlands.

In this video ranger Lorraine Cook takes her shoes and socks off to tell us about the benefits of wetland plants.

The Ramsar Convention on Wetlands is an intergovernmental treaty for the conservation and wise use of wetlands and their resources.