Wetlands are extensive and diverse on the Chatham Islands, where around 8.5% of New Zealand's threatened freshwater fish are found.

Wetlands are extensive and diverse on the main Chatham Island and Pitt Island. The other surrounding islands, islets and rock stacks have limited or no freshwater wetlands. 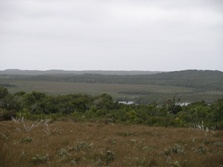 Extensive wetlands in the southern
tablelands of the Chatham Islands

The general flat terrain of the Chatham Islands has resulted in poor drainage of the land, causing saturated soils. Combined with the humid moist oceanic climate, this has fostered the development of extensive areas of blanket peat and associated wetland ecosystems.

About 60% of the land surface is covered with peat (to about 10 m deep in places) or peaty soils.

Although most Chatham wetlands have peat soils, many also have soils comprised of silt or sand. This variation in soil types results in a number of distinct types of wetlands such as infertile bogs, fertile swamps, fens, seepages, marshes, dune lakes, peat lakes, ponds and streams.

Bogs occur on elevated peat surfaces where they are nourished only by rainfall and therefore quite infertile. Small valleys carry moving groundwater and nutrients from mineral soils, and these are occupied by fens and swamps.

Lakes, ponds and pools of many sizes are common, some associated with peatland and others enclosed by sand dunes. These provide further wetland habitats, especially shallow freshwater aquatic areas and marshes around their margins.

The Chatham Island wetlands are dominated by plants found nowhere else in the world, with at least 23 of the 35 endemic Chatham Island flowering plants and ferns occurring in wetlands. For example, Cox’s matipo, toetoe, speargrass and sedges. 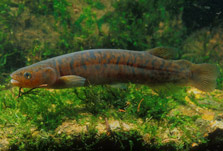 The wetland interface between land and sea is especially well represented around the margin of Te Whanga lagoon, a huge shallow coastal lagoon that occupies a fifth of the area of Chatham Island. Te Whanga lagoon is valued as a source of whitebait, patiki, swan eggs and cockles. Its marginal zones of mudflats, shell ridges, saltmarsh turf and rushlands are important for many coastal, freshwater and migrant wading birds.

The Chatham Island wetlands have been subject to extensive clearance and burning, as well as stock grazing and trampling.

There has been some drainage of wetlands for agriculture. However this is not as extensive as on mainland New Zealand, and agriculture is not as intensive, so Chatham Island wetlands do not have the same degree of nutrient enrichment from agricultural fertilisers.

They also lack most of the problematic aquatic weeds, exotic fish and pest fish that have impacted on the mainland wetlands.

Wetlands provide important habitat for many plants, invertebrates, fish and birds, and are there for us to admire, appreciate and look after.

DOC is working with Chatham Island landowners to protect and restore freshwater ecosystems.