Find out how ocean habitats are made and how they support sea life and ocean health.

New Zealand’s ocean area is over fifteen times the size of our land. This is an enormous area for our scientists to study. However, we’re learning more and discovering new marine plants and animals all the time.

Just as there are different types of habitats on land, the ocean also has a vast range of habitat types and species who live within them.  A habitat can be the size of your backyard, or big enough to cover hundreds of kilometres of ocean. It all depends on the unique conditions and features of that area.

A habitat is the environment where a species lives. It provides all the food, shelter, protection, and mating opportunities for that species.  You could think of your habitat as your house, your garden and the shop where you get your food from.

How habitats help us understand our oceans

Biodiversity, which means the range of animals, plants and other wildlife, is difficult to measure. But one way we can measure it is to study habitats.

By looking at habitats, we divide an environment into small, distinct areas to study them. We then bring together all the pieces we’ve studied to gain knowledge of the range of wildlife in our oceans. 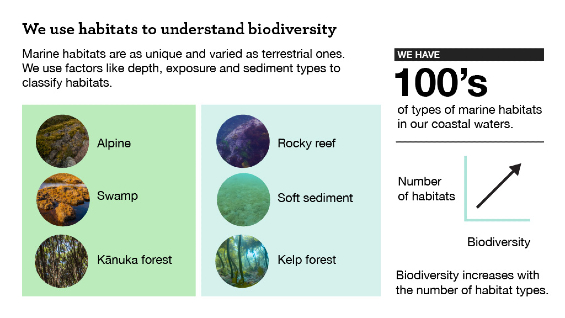 How ocean habitats are made and classified

Habitats in our oceans are formed in two ways: from living organisms, and from physical features such as sand, mud, or rocks. Each can extend from the seashore all the way to the deepest parts of the open ocean.

We classify habitats according to the combination of different factors. This includes ocean depth, the intensity of currents and waves, and the type of seafloor (such as coarse sand or mud). Each habitat has a distinct set of factors that make it a unique area. These areas support many levels of life. This can be from the smallest invertebrates to taonga species like tuna and commercially important species like snapper.

We classify some animals or other organisms as infaunal. This means they live within the sea floor. The infaunal organisms make their homes in the tiny spaces between sediment particles. Others are epifaunal, meaning they live on the surface.

For instance, a sandy sea floor habitat may have burrowing snails and crustaceans, while rays and eels may shallowly bury themselves in the sand for protection, or to hunt prey.

Habitats made by animals

Some types of wildlife in the ocean create habitats which other animals need to live. These areas are rich with many types of life and help keep the ocean healthy. They are known as ‘biogenic habitats’.

To create a biogenic habitat, sea animals build or change the surrounding area. These changes support more wildlife by making resources available such as oxygen and nutrients. In time these areas can support a vast range of plants and other living creatures. 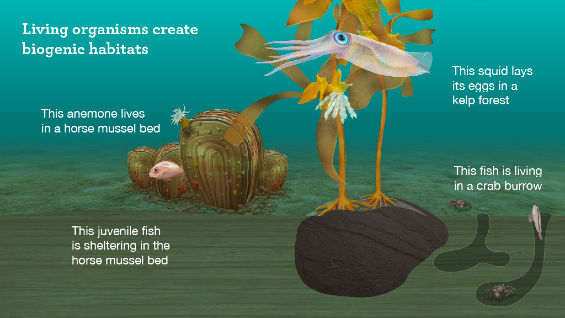 Why biogenic habitats are vital to wildlife and people

Many species struggle to live on seafloors of silt, mud, and rocks. But plants and animals like seagrass/rimurehia and horse mussels/hururoa happily settle on these sediments. Larger ocean plants also stabilise the sea floor. These provide strong 3D structures for invertebrates, fish, and shellfish to make their homes.

One animal that creates a biogenic habitat are green-lipped mussels/kuku. When there are many in a reef, they keep the water clearer and healthier. As a result, ten times more fish and lots of smaller animals can be found there. This provides food for seabirds and large marine mammals like fur seals.

People also rely on these animals. For example, mussels and New Zealand cockle/tuangi are a traditional seafood in New Zealand. Fishing companies also rely on them to sell, or for their support for other young fish like snapper and moki. 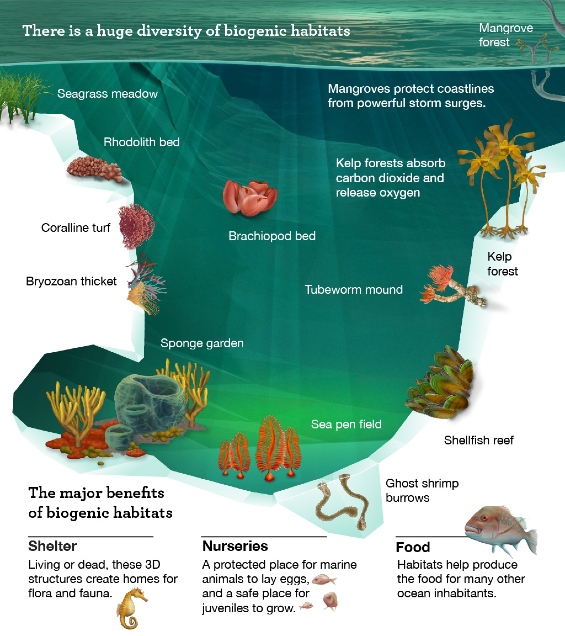