How much is human activity on surrounding land affecting the health of the ecosystem at Ulva Island-Te Wharawhara Marine Reserve and how is it changing?

Ulva Island/Te Wharawhara Marine Reserve is part of Paterson Inlet/Whaka a Te Wera. The land around Paterson Inlet is almost completely undeveloped and clad in native forest. Some surrounding land is in private ownership but most is conservation land or part of Rakiura National Park. The marine reserve is also isolated and a significant distance from any urban area or port.

Ulva Island itself is now largely uninhabited and has been a pest-free open sanctuary since 1997. Together, the island and the marine reserve are a rare example of an intact ecosystem from forest heights to sea floor. It provides a vital refuge for a wide range of species, habitats and communities that have disappeared or been modified in many other places.

Sheltered marine harbours with unmodified catchments like Paterson Inlet were once widespread in New Zealand, but are now rare. Increased land use and development around harbours worldwide has led to harbours as close to pristine as Paterson Inlet being found in relatively few places internationally. 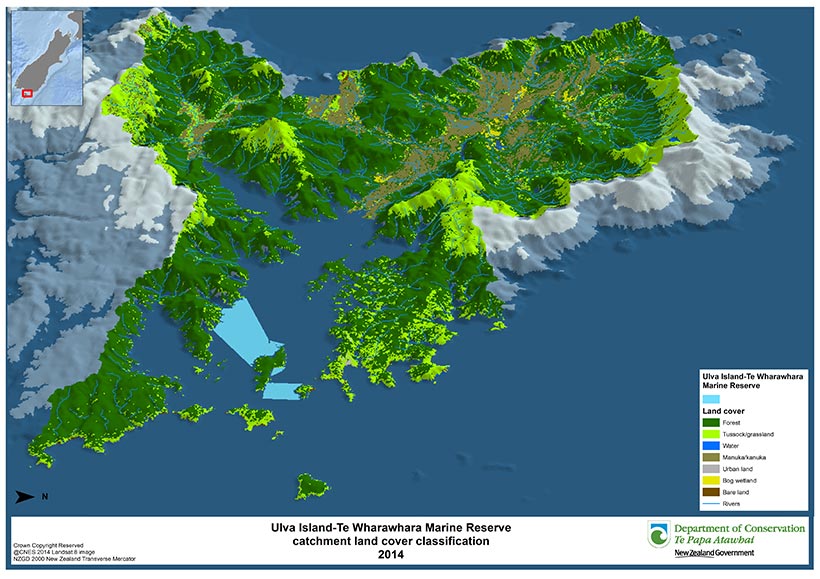 This map was created by DOC. Land use of the catchment area of the marine reserve was mapped using remote sensing software from Landsat satellite imagery and verified with aerial imagery. The land use classes were a simplified version of the classes used in the Land Cover Database developed by Landcare Research.