What is the impact of marine pests on the ecosystem at Ulva Island-Te Wharawhara Marine Reserve and how is it changing? 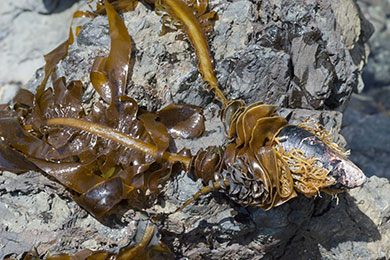 Marine pests are species that have been introduced to New Zealand waters by human activities and have the potential to cause significant impacts to the country’s marine environments and resources.

One unwanted organism or pest is established in Paterson Inlet – the invasive Asian seaweed Undaria pinnatafida. It has probably been present in the marine reserve since 2013.

Undaria was discovered in Big Glory Bay, the southernmost part of Paterson Inlet in 1997 after being accidentally introduced by marine farming activity. It is established in many other parts of New Zealand.

Chinook salmon (classified as a sports fish) are also present in the marine reserve. In 2014 at least 10,000 fish escaped from a salmon farm in Big Glory Bay, about 3 km away.

This programme was run by DOC from 1997–2004 to control and eradicate Undaria pinnatifida in Southland after it was accidentally introduced. The programme was initiated to contain the seaweed within Big Glory Bay and reduce the original population to very low levels. Since the programme was concluded, the abundance of Undaria in the area has increased.

DNA analysis of the seaweed was carried out as part of the programme. It suggested that the seaweed was not introduced with mussel spat from Marlborough, but as a fouling organism on a vessel or barge associated with the marine farms.

There is no monitoring for marine pests in this marine reserve. The Ministry for Primary Industries (MPI) maintains a national database of marine pests. MPI has also published a marine pest identification guide (PDF, 1,710K).

Call MPI on 0800 809 966 and notify DOC via marine@doc.govt.nz if you find any marine pests in the marine reserve.

The pest seaweed Undaria is a threat to Fiordland’s marine environment with its ability to quickly establish and outcompete native marine species.