How good is the water quality in Cape Rodney-Okakari Point Marine Reserve and how is it changing? 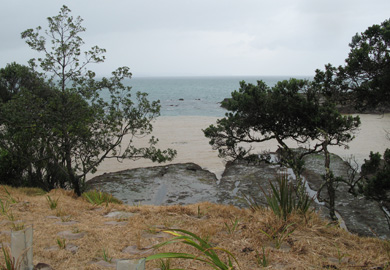 The water quality of the reserve is rated 'good to excellent' by Auckland Council.

Storms can release sediment from the catchment into the marine reserve and resuspend settled sediment, causing a short-term drop in water quality. These events may not be captured in regular monitoring and the cumulative effect of sedimentation from storms is not known.

No consistent change in water quality has been recorded in the last 20 years. No change is expected in the near future.

Auckland Council has been monitoring the water at Goat Island monthly since 1993 for a standard range of parameters including salinity, pH, turbidity, suspended sediment, nitrate and enterococci bacteria.

This site has a history of excellent water quality so it is no longer included in the council’s weekly summer Safeswim monitoring programme. The blooms can be fatal to sea urchins, whose spines bend over and then fall off. It is not known if the ostreopsis toxin transfers to fish that eat the sea urchins. People are advised not to touch the brown film.

Ostreopsis is a tropical species that was not seen in New Zealand before 1998. Its range is increasing into northern New Zealand and other temperate areas around the world as ocean temperatures rise.