How much is human activity on surrounding land affecting the health of the ecosystem at Cape Rodney-Okakari Point Marine Reserve and how is it changing?

Cape Rodney-Okakari Point Marine Reserve is a popular destination for local and overseas visitors, and tourism businesses have developed around the marine reserve and the nearby township of Leigh since the 1980s.

Although this marine reserve stretches along approximately 6 km of coastline, a larger area of surrounding land has been included in this measure. Land up to 10 km north and south that drains to the east is included, to reflect any effects from tidal currents and storm events that could wash sediment or pollutants into the marine reserve.

A separate map of the direct catchment and its land use is also included below.

Most of the land surrounding an area 10 km north and south of the marine reserve in 2014 was forest and grassland (46.5 and 46.4% respectively). Forest includes area of regenerating bush as well as pine plantation, grassland includes farmed pasture and uncultivated land. The remainder was urban land (3.8%) and barren land (3.4%).

Much of the barren land is steep cliff faces that are eroded during rainfall. Vegetation around the coastal areas reduces the amount of sediment and nutrients entering the marine reserve via streams. 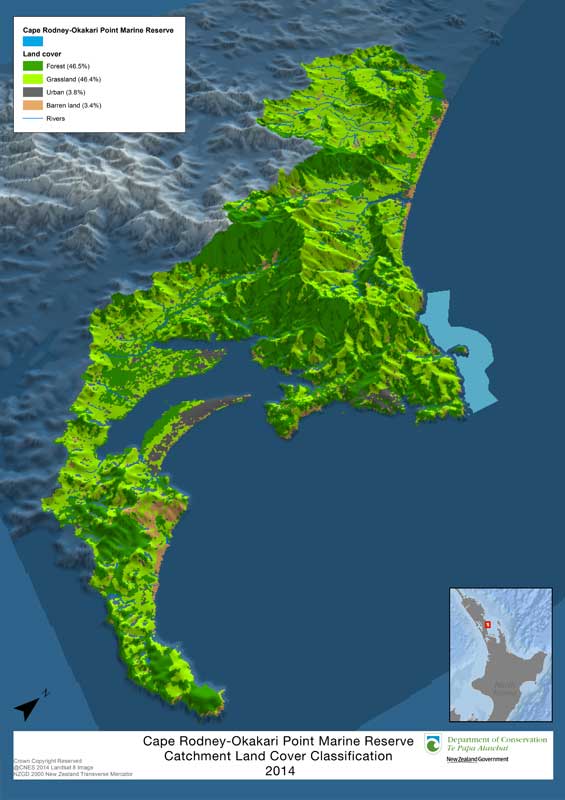 This map was created by DOC. Land use of the catchment area of the marine reserve was mapped using remote sensing software from Landsat satellite imagery and verified with aerial imagery. The land use classes were a simplified version of the classes used in the Land Cover Database developed by Landcare Research.

In the summer months, large numbers of people visit the marine reserve (estimated at 300,000 per year). Reports of popular reef areas being damaged by visitors exploring them at low tide are common. Scientific experiments and ongoing research is also carried out by Leigh Marine Laboratory staff and students.

The Hauraki Gulf attracts commercial and recreational fishers from nearby urban areas, including Auckland and Whangarei. Sand mining takes place outside the marine reserve off Pakiri.

Urban development in the catchment is likely to continue as the township of Leigh grows to support tourism activity related to the marine reserve. Coastal development from Auckland will also move northwards into this district. These factors would add substantial pressure to the marine environment.