How diverse is the habitat in Cape Rodney-Okakari Point Marine Reserve and how is it changing?

Cape Rodney–Okakari Point Marine Reserve contains a diverse range of habitats, which include sand, rocky coastline, barren areas and deep reefs. Species such as kelp and sponges also create habitats for fish and other organisms.

Te Hāwere-a-Maki/Goat Island provides shelter to parts of the coast. Hard greywacke rock layered with softer mixed stones and sandstone extend from the cliffs into the sea to form underwater reefs. Wave action and erosion on the softer rock has created overhangs, nooks and cracks for species to inhabit.

The habitats and biodiversity of the marine reserve are typical of the northeastern biogeographic region. Reefs in the reserve are mostly covered by kelp Ecklonia radiata, but some areas have a mix of seaweeds. A variety of sea snails, sea urchins/kina, corals, sponge gardens, sea squirts and other animals are found in the reserve – and some are found nowhere else. 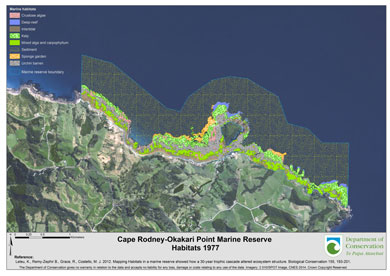 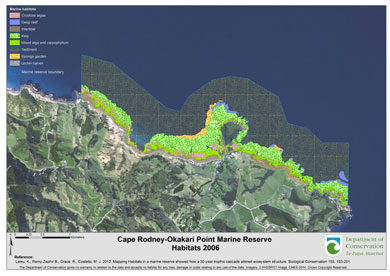 Before the marine reserve was created, much of the kelp forest on the reef areas was grazed bare by sea urchins (to urchin barrens). Rock lobster and snapper prey on urchins, so once fishing restrictions allowed the numbers of rock lobster and snapper to increase, their increased predation on sea urchins led to the kelp forests regenerating. Habitats in the marine reserve have been stable in the last 5 years.

Larger-scale factors in the Hauraki Gulf such as changing climate patterns, urban development and overfishing affect the health of this marine reserve.