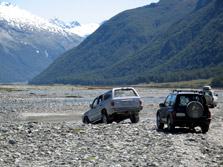 Many activities associated with land development have adverse effects on the habitats and populations of native plants and wildlife:

Even recreational activities can have adverse impacts; for example:

Many of these human activities and land use changes expose braided river ecosystems to invasion by exotic weeds.

Existing weeds that are of concern in upper Waitaki Basin braided rivers and wetlands include those listed below.  Most of the plants in the list link to the Weedbusters website. 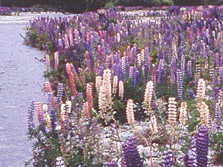 Popular in gardens, Russell lupin is unwanted in river beds

Other weeds that are not currently known to be in the upper Waitaki Basin but which would be of concern if they became established in its braided rivers or wetlands include:

Nest monitoring has shown that predation is the main cause of nest failure for birds that breed in braided rivers. An infra-red video study in the Tekapo, Ohau and Pukaki riverbeds found the main predators in these river systems to be cats, ferrets and hedgehogs. Stoats are important predators in more forested catchments. Australasian harriers/kāhu and Australasian magpies have also been filmed preying on eggs and chicks.