The upper Waitaki Basin’s braided rivers and adjoining wetlands are home to over 250 native plants, 27 mosses and liverworts and 35 lichens. 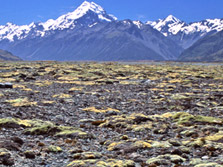 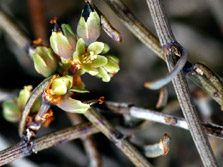 Braided rivers often look bare and gravel strewn, but look closer and you will see they support a range of specialised plants.

The types and numbers of plants depend on how long it has been since the last flood deposited new gravels, the climate they are living in and the amount of human activity in the area.

Spectacular fields of cushion plants mark a middle stage in the progressive development of plant communities from the deep rooted willow herbs dotted through freshly deposited gravels through to the tussocks, grasses and shrubs clustered on older gravel bars or channels where silts and soils have accumulated over time. The mosaics of plant life are complex, with each major catchment having its own unique elements and combinations of plants. 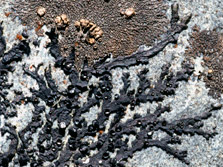 Many threatened plant species also find refuge in these riverbed and wetland habitats, especially in the more isolated headwaters of river systems where the invasive weeds which are characteristic of lowland rivers haven’t yet established. 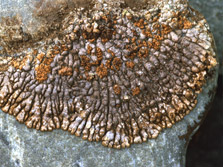 Lichens are a cornerstone of plant succession in riverbeds, especially on younger surfaces where nutrients can be hard to come by for plants, because they are able to snatch vital nutrients out of the air.

They are a diverse group, ranging from shapeless layers encrusting gravels and silts much like a cowpat, to seaweed-like fingers covering cobbles and boulders, to free-living curls which are blown about in the wind.

Look closely and you will find that many of the blackened boulders and cobbles sitting in riverbeds are completely coated in a layer of lichens.

Lichens can be difficult to identify without laboratory chemicals and microscopes, but even so, surveys have found 35 different lichens in the upper Waitaki riverbeds. 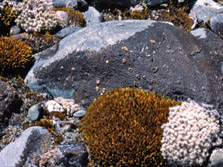 Mosses play a key role in riverbed plant development. Many of the cobblefields and boulderfields in higher rainfall areas of the upper Tasman, Murchison and Godley rivers are carpeted with woolly mosses (Racomitrium spp). These trap wind-blown silt and provide microhabitats for larger plants to become established in.

Mossfields are delicate and vulnerable to crushing by feet, hooves and tyres. Mosses are found in both dry climates and in water-laden habitats of wetlands and stream margins. So far, 27 species have been recorded in the upper Waitaki, with many more yet to be recorded.