If you are planning a number of restoration projects you may want to set up a community nursery. 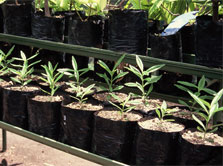 Grow your own plants

If you are have a number of restoration projects or even one large one extending over several years, you may choose to set up a community nursery or even grow your own plants.

This can be a very satisfying way of ensuring you have access to the appropriate ecosourced plants and in the process, become more familiar with a range of local species. Growing your own plants requires careful planning and ongoing commitment to be really successful.

Native plant production is labour intensive. Almost all stages of production require work to be done manually. The main plant growing season, from August to the end of December, is the most important time in the nursery and the period when the greatest amount of labour is required. This is when all new seedlings are transferred from germination trays to their own containers (called ‘pricking out’) and when most ‘potting-on’ occurs.

Make sure you have access to a good team of workers before committing to large-scale native plant production. Even with the most well organised community group, the number of volunteers and their enthusiasm can wane. It is important to look carefully at who, and how many, will still be turning up in 12 months time, and base the scale of the operation (i.e. the number of plants to be produced per annum) on the size of this reliable work force. On average, around 60 seedlings can be pricked out or 20 plants potted into PB3 bags per person per hour.

If you only have a small team of people with limited time available, it may be better to start small and gradually build up the scale of operation over several years. A small nursery producing up to 2000 plants per year can be established with the minimum of expense. The main requirements are weedmat, a watering system with automatic timer, shelter and shade. You can get by with fairly primitive conditions but if you intend to produce larger quantities of plants, some basic facilities will make a difference.

In colder areas, a greenhouse will be necessary to germinate native seed in spring, while in warmer areas a greenhouse will increase the speed of germination following seed sowing, provided the seed trays can be watered daily.

When designing your nursery, you need to allow sufficient space for the plants you intend to produce, and position the buildings and plant-holding areas so plants can be moved with a minimum of effort. The less times and distance the plant has to be moved from seed sowing until planting, the cheaper it will be to produce.

You will need to know your short and long-term production targets. The amount of space required in each building will vary depending on the containers used for initial production (e.g. root-trainers or tubes) and the size the plants are to be grown to before planting (e.g. PB2, PB5 or PB8).

Talk to operators of community nurseries or seek professional advice before you start.

Find out about the Motukarara Nursery

Seed trays containing germinating seeds should be housed in a warm, frost-free place – a greenhouse, plastic house or shed with plenty of light. Commercial greenhouses are available in just about any size and most come with effective ventilation systems. An alternative is a tunnel house covered with polythene. This can be constructed from reinforcing steel, with PVC piping for frames. Ventilation is achieved by lifting the polythene at the sides.

The number of seed trays to be housed will depend on the diversity of species being propagated and the size of the seed of each species. A nursery aiming to produce 10,000 seedlings per annum may have between 15 and 20 seed trays to house (each measuring 450mm x 330mm). Benches will reduce bending but they will not increase seedling space, because most revegetation species prefer full light and cannot be placed under the benches.

While it is possible to do the pricking out and potting on outside or under a lean-to, a covered, well-ventilated and well-benched potting space is preferable. The best designed potting sheds are ones that are proportionately quite long and have doorways at each end. Work benches are located down both or one of the long walls.

The length of a potting shed should be determined by the number of people likely to be working in it at any one time and the need for room for storage of materials. (Working space of 2 m per person should be allowed for.)

The potting shed should be located close to the potting mix pad and within easy reach of the shade house. Toilet and lunch facilities could either be built into the shed or located close by. Kitset garages can provide cost-effective potting sheds as long as the doors and windows are well positioned to provide good ventilation and access. However, if funds are limited or the scale of the operation small, an aluminium shed can be quite adequate (and if under ten square metres in size, may not require a building permit).

Once seedlings have been pricked out and potted on most native species need to stay under shade for several months before they can be safely placed in the open. Typically for native revegetation species you should have enough shade cover to house almost all of the year’s pricked out plant material and 25% of the potted material. Nurseries that grow forest canopy species and ferns (i.e. species that are not hardy colonisers) will need proportionately more shade house space.

Between 15 and 20% of the floor area of a shade house should be allocated to pathways and access. It's best to position the shade house near the centre of the nursery to minimise plant movements.

Shade houses are relatively easy to construct using 3.6 m fence posts and No. 8 wire framing on which to hang and peg the shade cloth - 50% green shade cloth is best for covering native plants. Weed matting should be laid on the floor of the shade house using special weed matting pegs.

All native plants need to spend four to eight weeks in the open to harden off prior to planting out. Colonising species such as karamu, manuka and kanuka actually grow better in full sun so should be in the stand out area for longer. At a nursery that produces PB2 grade plants, there should be sufficient space for all or most of the potted up material to be located in the stand out area (0.025 square metres per each PB2 or PB3 plant). Only those species that are to be planted under a canopy or sheltered area should be left in the shade house.

Stand out areas are best created using weed matting and long, narrow (3.6 m wide) strips with vehicle access between each strip to allow for the most efficient movement of plants. They can be located around the outer edges of the property because, once there, plants are unlikely to need moving again until planting. Ensure there is good shelter from wind by hedges, buildings or other type of wind break.

Potting mix is most cost-effective when purchased in bulk – ten cubic metres will be sufficient for approximately 10,000 PB2 grade plants. But be aware that fertiliser in potting mix is released if the mix is moist, limiting its shelf life. It may suit some small community nurseries to purchase a trailer load of mix (1/2 cubic metre) at a time.

Water for irrigation must be available at all locations on the nursery grounds. Watering can be done manually using a rosette on a hose but this is likely to be too labour intensive except for very small nurseries. Automated irrigation systems using PVC ¾ piping are recommended for the shade house and stand out areas (but not for seedlings which require careful watering). Ensure the sprinklers are sufficiently above the height the plants will grow to. Commercial nursery irrigation systems are available from horticultural suppliers and can be easily installed.

As well as the material and labour costs of nursery construction, there are also a number of capital items such as wheelbarrows (a wheelbarrow with a tray on top can accommodate 50 PB2 plants), trowels, propagation trays and storage trays that are required at the outset. You will also need to budget for the ongoing cost of materials to produce plants e.g. planter bags, root-trainers or tubes, plant labels, potting labels, potting mix, weed control etc.

Some items will be able to be recycled. It is also possible to put everyday items to alternative uses in the nursery e.g. 2 l ice-cream containers with holes punched in the base as seed trays, polystyrene mushroom trays for storing plants and milk cartons in place of PB bags. While annual costs can be minimised they cannot be eliminated and some ongoing source(s) of funding will be necessary to cover operating costs. And no matter how well organised your nursery is, there will always be plant losses to contend with. This aside, there is a lot of satisfaction to be gained from growing native plants.

Note: DOC thanks Roger MacGibbon of Natural Logic, Taupo, for providing this information.