These posters have fun facts about whio/blue duck, and why they are important.

These posters about whio are aimed at kids but great for adults too. Get the high resolution files to print for open days, classrooms, wall posters etc. 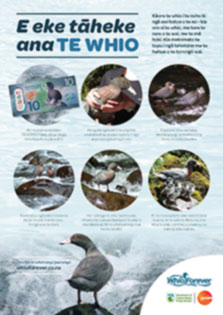 Let us know if you have any questions or recommendations

Share your stories about learning and teaching in nature. Show others what you've done and also help encourage them.

They can't live in any old waterway – they need fast-flowing high quality water, plants along the bank and lots of underwater insects. Find out more at whioforever.co.nz.

Get to know the whio

Giving the whio a fighting chance

With whio numbers around 2,500, the whio is officially vulnerable.

Genesis Energy and the Department of Conservation have partnered together in a five year programme to secure the future of this threatened native bird. Operating under the name of Whio Forever, this partnership is implementing a national recovery plan to protect whio and promote whio conservation and awareness.

Whio Forever workers use their own special tools to help secure the whio's future.

Stoats are the major predators, but even nature can be unfriendly; flooded rivers destroy nests and drown vulnerable ducklings.

This poster shows whio well-camouflaged within their natural habitat.

Take your students on an amazing learning journey, discovering why the whio/blue duck is so important to New Zealand.