Monitoring of long-tailed bats in the Iris Burn Valley, Fiordland

2015
A 2015 report on the results of monitoring a population of critically endangered long-tailed bats that were discovered in the Iris Burn Valley in 2011.

A population of critically endangered long-tailed bats (Chalinolobus tuberculatus) was discovered in the Iris Burn Valley in 2011. To determine the status of the population roost emergence counts were initially used in 2011 and 2012. To achieve more robust data roost captures banding individual bats were conducted in 2013, 2014 and 2015.

Rodent control was initiated in 2014, with ground control and an aerial 1080 operation. The outcome target of the pest control is to detect a stable or increasing trend in adult female survival/population size, and no declines relating to pest numbers, using minimum number alive (MNA) on banded bats.

Females are best to monitor as they make up the majority of the bats in a communal roost, males spend a lot of time in solitary roosts. Data suggests the population of female bats in the valley is at least stable and perhaps slowly increasing. The 2013 count was 54 (32 females), in 2014 59 (31 females) from Rocky Point area and 32 (24 females) from the Iris Burn hut area, and in 2015 the count was 63 (42 females).

Bats are New Zealand’s only native land mammals. South Island long-tailed bats (Chalinolobus tuberculatus) are ranked by the Department of Conservation as “nationally critical” and are the highest priority for protection (O’Donnell et. al, 2012).

Rats and stoats are known predators of bats, particularly in plague years following beech tree mast events (Pryde et. al, 2005; Hill 2011). Due to their sensitivity to these predators, bat populations are a good outcome measure for rodent and stoat control.

Translocation of both bat species has not been successful to date and extinction is likely if no management is carried out (Ruffel et. al, 2006).  In the Eglinton Valley bat populations have stabilized with adequate predator control (Pryde et. al, 2005).  Bats may be an indicator species for rodent management due to their sensitivity to predation.

Predator control in the Iris Burn Valley consists of a network of double set DOC 150 traps every 200m along the Kepler track. In March 2014, a 100x100 pindone bait station grid for rat control was established in a 550ha area surrounding known long-tailed bat roosts. In August 2014 an aerial 1080 operation, using a sowing rate of 2 kg per ha was conducted over 11,200ha in the Iris Burn Valley.

In December 2011 bats were captured in a harp trap in the Iris Burn valley and transmitters were used to track the bats to their roost trees. Roost emergence counts were conducted in 2011 and 2012. In 2011 the highest count was 69, and in 2012, 42. Roost emergence counts are often an underestimate of the population due to the difficulty of counting fast moving bats in increasing darkness, therefore a concerted effort was made from 2013 to catch bats at roost trees to individually mark them. Individually marking a population is a more robust method to detect changes in populations.

Mark-recapture analysis of banded long-tailed bats in the Eglinton Valley detected changes in populations that other monitoring methods failed to pick up (Pryde et. al. 2005; Pryde et. al, 2006). In 2013, the MNA from mark/recapture was 54 (32 females), while in 2014, the MNA was 59 (31 females) from Rocky Point area, and 32 (24 females) from another colony found in the Iris Burn hut area. It was decided to concentrate efforts on the Rocky Point colony as an indication of the status of bats in the valley, rather than the Iris Burn hut colony or any others that may be in the valley. The MNA for 2015 was 63 (42 females) from the Rocky Point area. A total of 42 roost trees have been found since 2011.

The objectives of monitoring long-tailed bats in the Iris Burn Valley has, initially been to assess the size of the population and map maternity roost trees. Now that pest control has been established in the area, annual monitoring of the bat population will be an essential component of this work, at least for the first few years. The monitoring objectives are:

The outcome target of the pest control operation is:

The Iris Burn Valley is in the Kepler Mountains, Fiordland National Park. The forest community is made up of indigenous upland/montane beech forest, with silver and mountain beech dominating the valley sides, with silver beech on the valley floor in the river delta. The altitude of the area ranges from approximately 240m a. s. l on the valley floor, to approximately 1600m on the adjoining ridge tops. The Iris Burn Valley is part of the Kepler Great Walk track, receiving approximately 10,000 overnight visitors per year.

It also boasts the Kepler Challenge, an internationally renowned mountain running event. The Kepler Challenge Organising Committee in partnership with the Department of Conservation maintains stoat traps around the length of the Kepler track. The Kepler Backyard Birdsong Project is a three stage restoration project being led by the Fiordland Conservation Trust in partnership with the Department of Conservation. Stage one of the project is sponsored by Kids Restore New Zealand (The Air NZ Environment Trust) and the Community Trust of Southland. 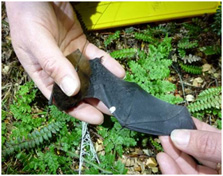 Bats are caught during the evening using free standing harp traps. A harp trap consists of a metal frame that supports two rows of fine monofilament with a catch bag at the base (figure 1). Traps are checked at midnight and dawn to ensure minimum stress on any pregnant or lactating bats that may be feeding young.

All bats caught in harp traps are fitted with individual identification bands (figure 2). Information about the bat is recorded: age, sex and reproductive status. Transmitters are attached to adult lactating females as they are more likely to return to a maternal roost. The transmitter (model: BD2A, weight <0.8g) is attached to its back between the shoulder blades with contact adhesive.

The long-tailed bat monitoring in the Iris Burn Valley took place from the 9 November to the 17 December 2015. Staff members were Warren Simpson, Jason Van De Wetering, Em Oyston, Hannah Edmonds and Jono More. A volunteer Kathy Halsall was with the team for the first two weeks.

The total of all captures at roosts and free standing harp traps was 63 (25 new and 38 recaptures).

The numbers from 2013 and 2014 have increased due to individual bats found in subsequent years, indicating they were in fact alive at that year, as minimum number alive is defined as the number of individuals caught in a capture session, plus those that were not caught at that time but were caught both previously and subsequently: actual number (Krebs, 1966).

During the day transmittered bats are tracked to their roost trees using a receiver and a three element hand held Yagi antennae. Once the roost tree is found, a roost description form is filled out including: GPS co-ordinates, information on tree height, diameter, type of tree and a sketch of tree and the location of the possible cavities where the bats may be roosting.

If roosts are unable to be trapped, emerging bats are counted on dusk. Observers position themselves on the ground and watch for bats to emerge. A hand held bat detector is used to help detect bats when they begin to emerge.

Roost trees are climbed by trained climbers, using single rope techniques. The receiver is taken to narrow down where the roost hole is located. Several roosts had to be climbed to place the harp trap, prior to catching and at night to lower the harp trap, after bats had been caught.

The long-tailed bat monitoring in the Iris Burn Valley took place from the 9 November to the 17 December 2015. Staff members were Warren Simpson, Jason Van De Wetering, Em Oyston, Hannah Edmonds and Jono More. A volunteer Kathy Halsall was with the team for the first two weeks.

The total of all captures at roosts and free standing harp traps was 63 (25 new and 38 recaptures).

The numbers from 2013 and 2014 have increased due to individual bats found in subsequent years, indicating they were in fact alive at that year, as minimum number alive is defined as the number of individuals caught in a capture session, plus those that were not caught at that time but were caught both previously and subsequently: actual number (Krebs, 1966).

The outcome target: detecting a stable population in female bats, with no decreases relating to pest numbers was met during the 2015 monitoring period. In 2013 there were 32 female bats from the Rocky Point colony known to be alive, 31 in 2014 and 42 in 2015. More captures at roost trees would have seen an increase in the MNA. The team averages only one catch per week which is largely due to the roost trees being unsuitable to trap, or not being able to determine where in the tree the bats are roosting. This year the team only managed 4 captures at roosts. Cold weather hampered catching bats at the beginning of the season.

We recommend a minimum further two years of monitoring the long-tailed bat population in the Iris Burn Valley, for 5-6 weeks during December and into January, rather than in November which is often colder. A roster with rotational teams of two staff in the valley every night for 6 weeks should be introduced rather than having two staff on weekly with weekends off. This would enable more captures and therefore more information. All roosts found should be trapped where possible and all new bats marked, with a particular focus on the Rocky Point colony.

Thank you to the 2015 long-tailed bat team: Jono More, Warren Simpson, Jason Van De Wetering, Em Oyston and Kathy Halsall. Thank you to Ali Hay, Chris Birmingham and Pete Young for picking us up and dropping us off in the boat. Thank you to the hut wardens for their enthusiasm and support with the bat project. Thank you to Graeme Elliott for sorting the funding.