Conservation, ecology and management of migratory galaxiids and the whitebait fishery

June 2018
A summary of current knowledge and information gaps.

Conservation, ecology and management of migratory galaxiids and the whitebait fishery (PDF, 3,843K) 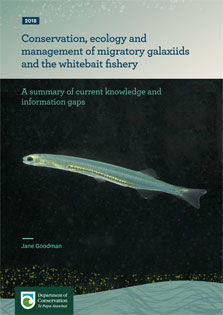 The species and the fishery are managed by DOC under several pieces of legislation. Regional councils also play a role in the conservation of these species through managing the adverse effects of resource use on habitat and water quality.

This report summarises current knowledge about migratory galaxiids and the whitebait fishery. Where possible, published literature has been used; where published literature is not available and unpublished reports are accessible these have been cited. Personal communications have also been referenced where unpublished reports or data are not available, but research has been carried out.

Key conclusions of this collation of research and identification of information gaps are:

Critical to the conservation and management of these species and the fishery is collating existing information and identifying gaps, so that decision making about future management can be better informed.