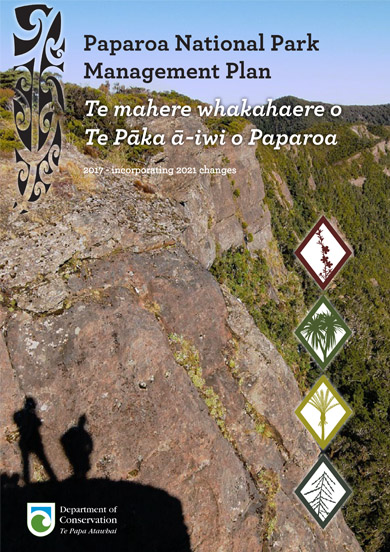 The maps in the plan are available here in higher resolution, you can zoom in to view the detail or print them as A3.

This publication is the second management plan for Paparoa National Park. It has been prepared in accordance with the procedures set out in Section 47 of the National Parks Act 1980.

The intention to review the Plan was publicly notified on 16 November 2015 and a draft Plan advertised on 1 June 2016. 107 submissions were received with hearings held on the 17-18 August with the West Coast Tai Poutini Conservation Board. All written and oral submissions have been given full consideration in the finalisation of this plan.

The approved plan  becomes, in effect, a 'contract' between the West Coast Tai Poutini Conservation Board, (on behalf of the public), the Treaty partner, Ngāi Tahu and the Department of Conservation.

A management plan is an important tool for the overall management of a national park and will  be the day to day working document of the park managers, while providing the statement of intent for the longterm direction in which the management of Paparoa National Park will proceed.

The New Zealand Conservation Authority approved the plan on 3 March 2017.

Luxuriant coastal forest, limestone cliffs and canyons, caves and underground streams, and an absolutely spectacular coastline, are all packed into one national park. The bizarre ‘pancake-stack’ coastal formations attract visitors to the area.